Readers of this blog will recall that I routinely look at issues of student engagement via our surveys, news articles, available research, and comments offered by students.

In this post we again here from students directly concerning the positive role that teachers and school can play for students in difficult personal and neighborhood surroundings. The insightful excerpted comments below come from 5 students in the Chicago Public Schools, courtesy of their English teacher, Ray Salazar.

One of the biggest reasons that students drop out is because they feel like the system is working against them. What that means in layman’s terms is that students don’t feel like their schools care about them… And let’s be honest, most of the time when we say ‘lower-income’ the hidden implication extends to minorities. As a minority students who has been around low-income schools all my life, I’ve seen it myself: students dropping out because they don’t feel like their teacher or school cares about them. – Barbara Cruz

As a teenager who grew up on Chicago’s South Side it is not uncommon to see violence on the streets, mostly from gangs. My own family has been broken due to poverty. I know the struggles. I know what it’s like to go to school reflecting on what my parents were arguing about, usually money. But when I got to school not giving a damn there was almost always one teacher who gave me the inspiration to get me through the day…. Therefore, teachers need to know how to read their students. Not just get them to do their work but to inspire them to be there. – Concepcion Morales 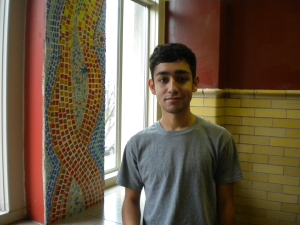 The way students feel in schools can make all the difference in whether they become successful or not. Teachers should realize that boredom plays the biggest role in the outcomes of a person’s life. If a student is interested in school because of the way a teacher operates the class, much of their energy will revolve around school which will lead them to success…. It is essential that schools are safe and interesting environments for students. – Jorge Lopez

School for me was a getaway from home back in 7th grade. My former teacher, Mrs. Reyes, was someone I looked up to and being in her class was always fun and interesting. After school, she’d give me piano lessons and I was always so excited to be there. Right after piano lessons, my parents would often argue. Instead of feeling sad or worries, I played piano or would do her homework to cheer me up….. A class room that’s boring involves a teacher who is always on her laptop, awkward, or not trying to engage her students…. If you’re motivated by your teacher, you feel hopeful for being successful. – Marilyn Hurtado.

Many people believe that good teaching cannot help students who have struggled in their homes and their neighborhoods. They believe that kids cannot overcome their struggles. However, I believe that good teaching can help a student overcome his or her struggles… An example of this was when my sister was in elementary school. One of my sister’s closest friends was shot and killed by a gang member…. My sister was depressed for some time when she finally got back to school, but something changed her mood at school. She was slowly getting over her friend’s death and began to focus on her work. She went on to graduate from 8th grade. – Nestor Navarro.

It is such honest accounts from kids that are so obviously missing in the current policy debate. What they tell us – if we will listen – is that school in general and teachers specifically have the power to make a great difference, for good or for ill – even in conditions of poverty and difficulty. Those who would fixate on such fine goals as “eliminating poverty” or “improving schools of education” seem to want to do everything but get their hands dirty, right now, by paying close attention to what today’s students – here, in front of us – need and deserve. And the good news shining through all these varied student essays is what I keep saying though my critics hate to hear it: that common-sense and do-able teacher actions can make a great difference – now. Make school safe; make it interesting and fun in class; have an interest in me and my life; inspire me, don’t just teach me stuff. How hard is this to commit to, now?

All the current noise – about “corporatists,” about whether Common Core is good or bad – misses the point, and is an easy refuge for adults in armchairs arguing adult issues. Reform begins with making school a great place for today’s kids; reform begins by really listening to the client and seeing what works and doesn’t work today, now. Why would we lose another generation of kids to score a few more policy points?

My deep thanks to Barbara, Nestor, Jorge, Marilyn, and Concepcion for taking the time to write to share their heartfelt thoughts. And thanks to Ray for reaching out to me to share their work. Clearly Ray knows a thing or two about empathy and inspiration.

21 thoughts on “Listen to the students, policy-makers and pundits”

Grant Wiggins is the co-author of Understanding by Design and the author of Educative Assessment and numerous articles on education. He is the President of Authentic Education in Hopewell NJ. You can read more about him and his work at the AE site (click here)