“You know that the beginning is the most important part of any work, especially in the case of a young and tender thing.”

Where to begin? – an essential question in all story-telling and thus, also, in curriculum writing. Where, how should we begin a long intellectual journey? What must we accomplish in the beginning, so as to serve the learner and advance the learning best?

A curriculum etymologically is a ‘course to be run’. Thus, a course of study is very much a trek over many months, through varied terrain, with challenges, twists and turns, and eye-opening vistas en route. Surely, then, starting well matters greatly.

Our start should fill us with interest and initial resolve, at the very least, wouldn’t you say? As travelers led by a guide we naturally have all sorts of concerns and questions for which we need answers: where are we headed, by what means, for what purpose? Why should I undertake this arduous trip? What should I hope for? What can I expect? Am I prepared? How might I be better prepared? These are reasonable questions; they deserve answers, whether it is early September at the start of the Appalachian Trail on Mt. Katahdin or in the early days of Algebra I or US History.

Yet far too many textbook-based courses utterly fail this test. Many textbooks for guiding young trekkers just start abruptly – rudely – by taking no questions nor addressing our hopes and fears. We just start in the weeds, the technical muck of the subject. No map, no pep talk, no orientation to where we are headed and why it might be worth our while – just start walking (and trust us).

If you think I exaggerate, I offer the following two examples, one from a recent Algebra textbook, another from a text on US History Since 1865. 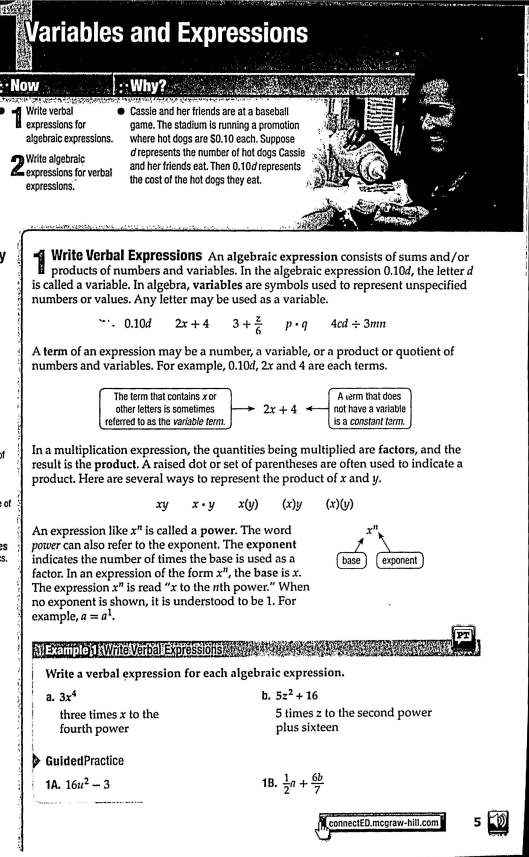 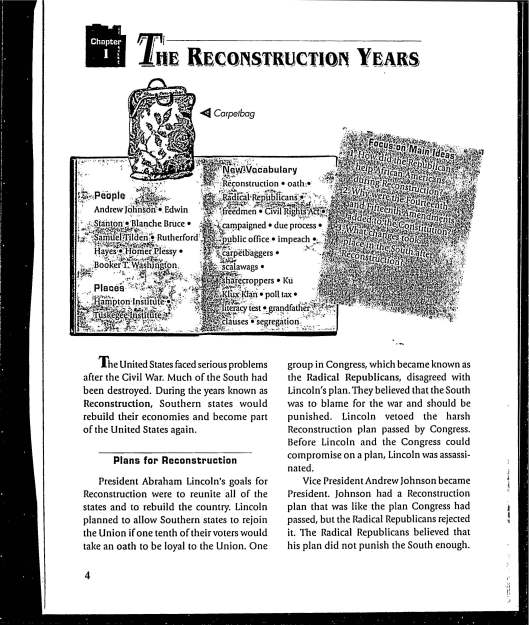 For contrast, watch the opening minutes of Ken Burns’ The Civil War and ask yourself: how is Burns enticing us to make the journey in a way far more effective than that of the textbooks?

Or consider the beginning of one of the most notable math courses ever taught, Harold Fawcett’s geometry course from the 1930’s, about which I have previously written as have others:

When the class met for the first time most of the pupils had their notebooks with them, some of the more thoughtful had brought their compasses and straightedges, and all of them expected to be given a text from which the work of the year would be taken.

There was thus considerable surprise when, after the usual routine of the opening day had been completed, the teacher said, “There is no great hurry about beginning our regular work in geometry and since the problem of awards is one which is soon to be considered by the entire school body I suggest that we give some preliminary consideration to the proposition that ‘awards should be granted for outstanding achievement in the school’.”

Why did Fawcett start his course in Geometry here? Because to start with the idea of necessary “givens” he thought it wise to “begin this work with a consideration of the importance of definition in matters which claimed the interest of the pupils.”

In the previous school year there had been a great debate about school awards and prizes, so Fawcett thought: “Here, then, was a problem of real significance to the pupils about which there had been some controversy and in the consideration of which definition was likely to be an important issue.  The teacher decided to give them an opportunity to discuss this problem, anticipating that in the argument which was almost certain to develop the necessity for clarity of definition would be recognized.”

In the early going of the course, students worked to define familiar ambiguous terms – e.g. if we give awards to teachers, is a librarian a teacher? – and to understand how the rules in games like baseball determine logical consequences, just as axioms lead to theorems in geometry. From this conceptual start, Fawcett asked students to propose similar what-should-be-accepted-as-givens in geometry. In other words, from the start, students were asked to think like mathematicians: argue for what the axioms should be.

Fawcett’s goal was transfer, not mere geometry understanding: to see if students could use such careful thinking to detect logical fallacies in commercials and political speech! He used both geometry and critical thinking tests to measure his results. (His book, The Nature of Proof, was an NCTM Yearbook over 70 years ago but has been reprinted recently by NCTM and is thus available both new and used widely – it is a must read for math teachers).

Such sensible and sensitive beginning is infrequent – indeed, it is still rare, 70 years later, especially in math, science, and history. Most teachers, relying on textbooks, end up unthinkingly commencing with confusing and perspective-less expertise, just as Dewey described (as further discussed in my previous post): “Technical concepts and their definitions are introduced at the outset. Laws are introduced at an early stage, with at best a few indications of the way in which they were arrived at. . . . The pupil learns symbols without the key to their meaning. He acquires a technical body of information without ability to trace its connections [to what] is familiar—often he acquires simply a vocabulary.” Our myopic educational sherpas seem blind to the idea that to start, as a novice explorer, immediately with the expert’s language, knowledge, and technical focus may be the worst way to begin – no matter how well-intentioned – if our aim is novice learner engagement, confidence, and understanding.

Let’s start thinking differently about starts. At Harvard University, students do not pre-register for courses. Instead Harvard has what is called “shopping week” (though it is really 2 weeks) in which students shop around, sitting in on courses before finally registering. It is a godsend for finding teachers and courses that one really wants: I steered away from 3 courses as a graduate student, based on the opening days (despite the fine catalogue descriptions).

So, here’s a little thought experiment for you as a teacher, for pondering this summer: suppose there were no required courses; suppose students could shop and vote with their feet. What would you do in your opening week to make students eager to persist with your course?

I’ll bet teaching technical vocabulary the first day is not high on the list.

(This post and the previous one on turning everything into little bits constitute the background writing for what I promised a few posts ago: proposing a completely different way to structure an Algebra course. That post will occur soon.)

20 thoughts on “Beginnings, and their educational importance”

Grant Wiggins is the co-author of Understanding by Design and the author of Educative Assessment and numerous articles on education. He is the President of Authentic Education in Hopewell NJ. You can read more about him and his work at the AE site (click here)
Join 6,632 other followers